The Tytera TYT MD-390 is the latest DMR radio from Tytera or TYT that is the ruggedized twin to the Tytera TYT MD-380. This unit packs many features, including, superb audio, a multicolored LCD display, front panel programmability, rugged IP67 compliant construction, plus much more. This is a great radio for anyone looking for a durable DMR radio on the cheap for ham radio or commercial use. At the time of this review, the selling price for a new the MD-390 was $170 USD.

The Tytera TYT MD-390 radio comes standard with the following items out of the box:

The most notable differences between the MD-390 and the MD-380 is that the MD-390 is slightly taller and wider than the MD-380. In addition, the keyboard uses larger buttons and the knobs on the top are larger and slightly raised above the radio body, making them easier to adjust. These make for a radio that is easier to hold and use for extended periods of time – at least for those with larger hands. 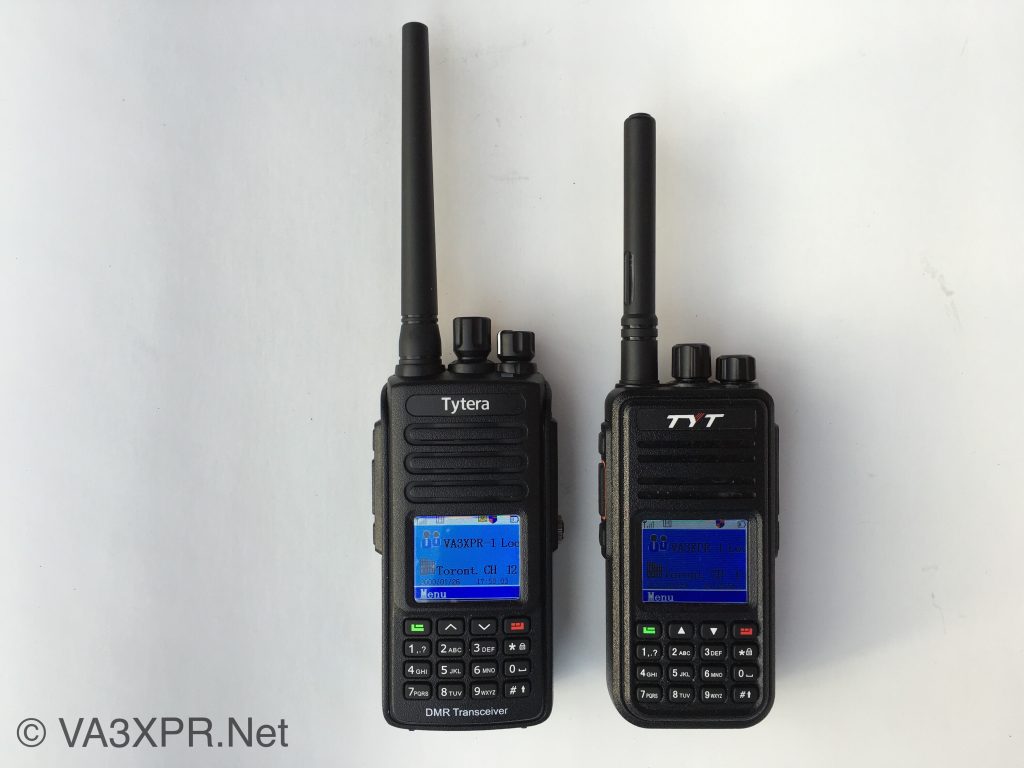 Another notable difference between the MD-390 and the MD-380 is that the MD-390 now includes a waterproof cover for the accessory connector. To remove this over, the user will require a screw driver or coin or unscrew it, which is an improvement over the flap over used with the MD-380, which could be prone to being torn off or no longer working due to frequent use. Finally, the push to talk (PTT) button on the MD-390 has been replaced with a plastic button, whereas the MD-380 used a tactile rubber button, which feels like a step down in quality. Hopefully Tytera / TYT will consider reverting back to the original PTT button with future builds of this radio, as it was much better than the new one.

So how waterproof is the MD-390 anyway? Well, we wanted to find out so we took our new out of the box MD-390 for a swim and to our surprise, it survived! Of course, we don’t advise that anyone else does this to their own MD-390 unless they are feeling very brave!

The UHF version of the MD-390 comes standard with two antennas – a stubby antenna and a wideband extended whip antenna. The wideband extended whip antenna is 36 cm (14 in) long and should provide better performance than the shorter stubby antenna, which is 12 cm (4.75 in) in length, however at the tradeoff of making the radio much less portable. The antenna connector used with the MD-390 is a standard SMA female connector, making it easy and inexpensive to connect it with an external antenna with the purchase of a SMA male adapter.

The MD-390 comes standard with a 7.2V 2,200 mAh Li-ion battery, which has a slightly higher capacity than the 2,000 mAh battery included with the MD-380. In addition, the MD-390 includes a 120/240V desktop charger, a USB programming cable, an earphone with a PTT switch, a belt clip, a stubby antenna, an extended whip antenna (UHF) and a user manual. Additional batteries and accessories, such as a speaker microphone and programming cable, can be purchased directly from one of the TYT authorized dealers.

The Tytera TYT MD-390 is a great low-cost option for anyone looking for a rugged DMR radio that doesn’t break the bank – both for the ham radio or the commercial user. This radio is well-built and has been tested to some degree, to be waterproof. While the radio has some minor usability issues, they are unlikely to adversely impact the functionality of the radio for most users. Overall, we feel that the MD-390 is a great value priced DMR radio that is likely to please the demanding ham radio or light commercial user who needs a radio that can withstand the elements. If you have additional questions about this radio, please join the DMR Facebook discussion group for more details.