The APX 7000 is one of Motorola’s latest radios for the public safety market, featuring multi-band capability (VHF, UHF 380 – 520 MHz and UHF 700/800 MHz), integrated GPS, dual LCD displays and front keypad programmable, plus much more. This is a excellent radio for amateur radio use on the 2m and 70cm bands, as it is feature rich, durable and likely to more than satisfy even the most demanding user.

The APX 7000 is a unique radio in that it’s essentially dual sided. This takes a little getting used to, but turns out to be quite a practical enhancement. The large LCD display and keypad are one side of the radio, while the primary speaker is on the other side. The side with the large LCD display also has a speaker, albeit it is much smaller and not as loud as the primary speaker. It is important to note that the radio has multiple built in microphones, so no matter which way you speak into it, you will be heard.

Also, the APX 7000 features the ability to change cases, so if you’re looking for a yellow, red or blue case instead, Motorola has one for you.

There are two knobs on the APX 7000 – one is the power switch/volume knob and the other is to select the desired operating channel. Both of these knobs have been designed for ease of use, even if you have gloves on. To increase usability for use with gloves, Motorola also released the APX 7000XE, which basically has fat knobs, making it much easier for public safety applications, where using with thick gloves is a requirement.

Depending on which RF bands are installed in the APX 7000, will determine which dual band antenna model should be used with it. For an APX 7000 with both the VHF and UHF Range 1 (380 – 470 MHz) RF modules installed, the antenna to use is the PMAT4001A. This antenna will cover the entire VHF and UHF ranges, thereby giving the user the flexibility to operate the radio on a variety of frequencies without the need to change the antenna. One downside to this specific antenna is that it is 8.5” long and can make the radio a little awkward to use. Although some users may find the benefits of having a single antenna that covers all operating frequencies outweigh any issues associated with it’s length, others may find that a slightly smaller version would make the radio much easier to carry.

One of the major features of this radio is its incredibly loud internal speaker audio, touting a full 1,000mW of audio output. Typically, Motorola radios audio output in the range of 500mW, so this unit will be heard in places where others cannot. Compared to typical ham units with audio output in the 250mW range, you will hear this radio in any but the noisiest hamfests. 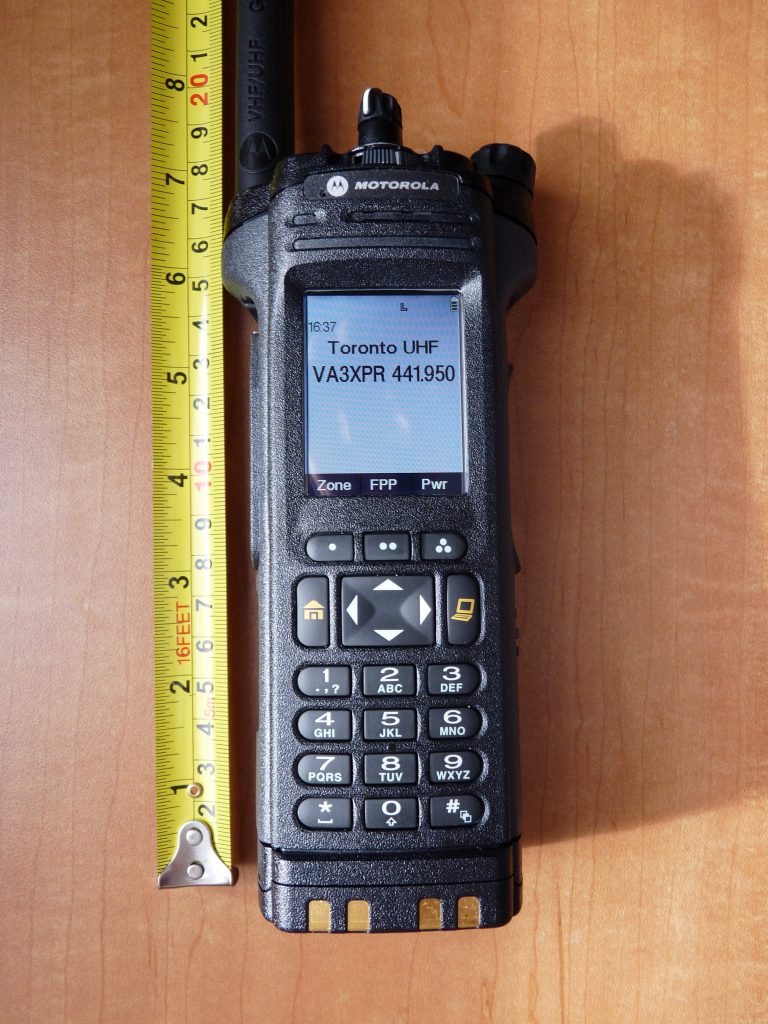 In terms of audio quality, while this radio sports a super loud speaker, the audio response of the speaker is noticeably skewed toward the higher audio frequencies, making the radio sound higher pitched.  So if you enjoy the loud full audio of other Motorola radios, such as the Astro Saber and the XTS 5000, you may want to keep them around for those times you want a full audio experience.

The APX 7000 model 3.5 comes standard with two LCD displays – one for the top of the radio and a large one on the front (or is it back?) of the radio. The display on the front is a large multicolor display, display the status of the radio, including zone, channel, time, GPS status, battery capacity, plus much more. It’s refreshing to see such a display on a Motorola radio, but this elegance comes at a price, as the display is bright and no doubt has a significant impact on the radio’s battery life. You can adjust the display timers in the programming software, however you cannot adjust the brightness to conserve your battery capacity. Furthermore, with such a large display, you would expect to be able to use a large portion of the space for items commonly used, such as the zone and channel information, however Motorola limits the user to 1-line each for the zone and channel information. If you type a short zone or channel name, the font is large, but it gets progressively sized down as you add more characters. Text wrapping for these two items would be a nice improvement.

The APX 7000 will support APCO P25 digital, both Phase I (FDMA) and Phase II (TDMA), plus narrow-band analog communications. Communications with both of these modes are as clear as can be and worked like a charm.

For the RX, Motorola states the following specifications:

While there are a plethora of battery chemistry and capacity combinations available for the APX 7000, there are essentially two IMPRES lithium ion capacity options for the radio – standard capacity and high capacity.  What’s the difference? See the chart below for the comparison:

For normal use, the standard capacity battery will last for about 8 hours. If additional capacity is required, you can always pick-up a high capacity battery, however the radio will become 2” taller, increasing it from 7.25” to 9.25” (without the antenna attached).

As for chargers for the APX 7000, there is a single unit IMPRES charger specifically made for the unit (WPLN7080A) or if you have an existing IMPRES charger for the XTS series, you can purchase an adapter (NNTN7687A) that will allow the APX 7000 to fit into that charger.

In order to fully realize the potential of this radio, one must have access to the APX CPS (Customer Programming Software) and a programming cable to configure it to your particular requirements and usage preferences. Many vendors will program your radio for you for a charge, or you can do it yourself. The APX CPS software allows many configuration options for the radio and almost every attribute of the radios operation can be controlled in the APX CPS. Of course, with so many configuration options available, programming the radio can become a very time consuming and difficult task. Fortunately, the help menus within the APX CPS help a great deal in explaining what the carious options are for. It is highly recommended that if you want to program one of these radios for amateur radio use that you first consult with professional who is familiar with the radio and the APX CPS programming software.

One of the key features of this radio that makes it particularly appealing to ham radio operators is its ability to be programmed via the keypad. To accomplish this, one must first enable this feature with APX CPS, as this will allow easy changes to zones, operating frequencies, PL tones, channel names, modes (analog, digital or mixed), plus much more.

There are many accessories built specifically for this radio and compared to other Motorola radio models, you are likely to find that these accessories are much higher priced. Fortunately, some more common accessories like speaker microphones for MotoTRBO units, will work with the APX 7000. It is recommended that you carefully consider what accessories you will need before purchasing these, as the total cost of ownership can rise quickly with just a few accessories. For most users, the universal carry holder (PMLN5331), a speaker microphone (PMMN4025A), a single unit charger (WPLN7080A) and the dual band VHF/UHF Range 1 antenna (PMAT4001A) will suffice. 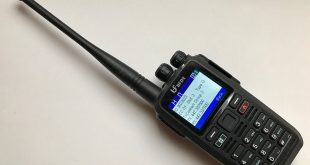 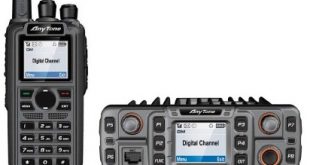