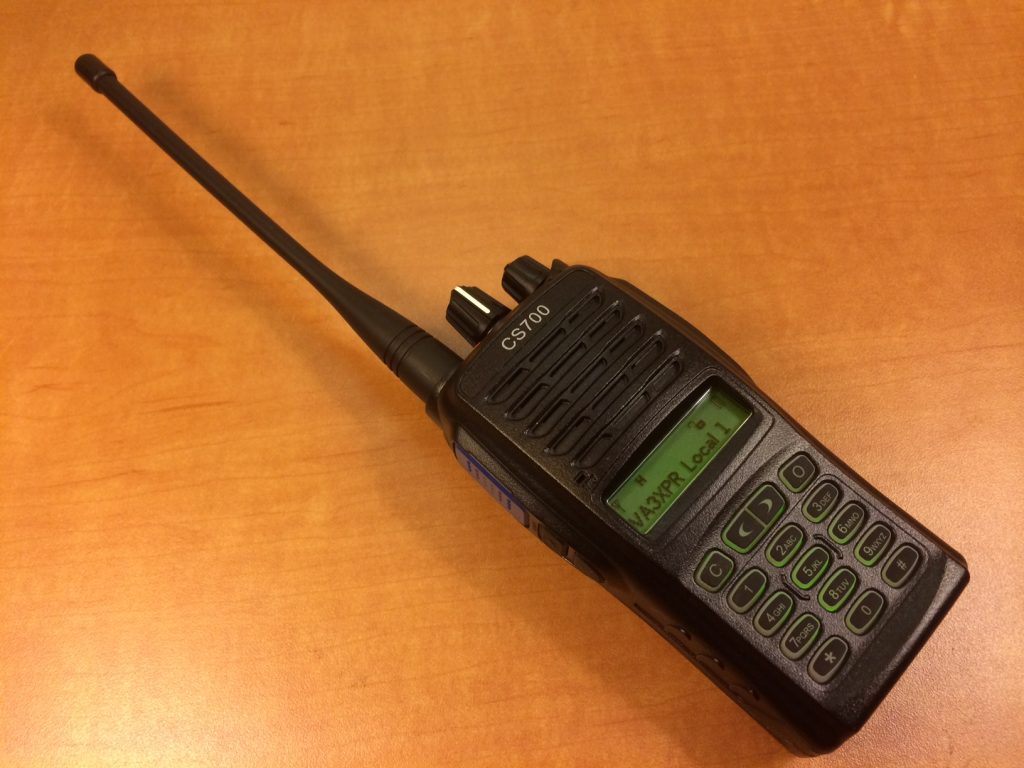 The Connect Systems (CSI) CS700 portable radio is a low cost, high value Digital Mobile Radio (aka DMR) radio that has recently been released to the ham radio community. Overall, this is a great single band UHF DMR radio for ham radio use on the 70cm band and will make a great radio for anyone interested in getting started with DMR. At the time of this review, the pricing for a new CS700 directly from CSI was $180USD, which includes a 1-year warranty.

The CS700 comes standard with the following features:

The CS700 is a compact portable radio that is small, lightweight, has a great ergonomic design. Being only about 13cm (5 1/4”) high or 27cm (10 3/4”) with the antenna and about 275g (9.7oz) in weight, this radio fits nicely in the hand and can even be carried in a shirt pocket, making it a pleasure to use. In addition to its design, the radio appears to be well built, unlike many other Chinese-made radios. The radio feels very solid and the accessories fit well, including the battery, antenna and the accessory port dust protector. 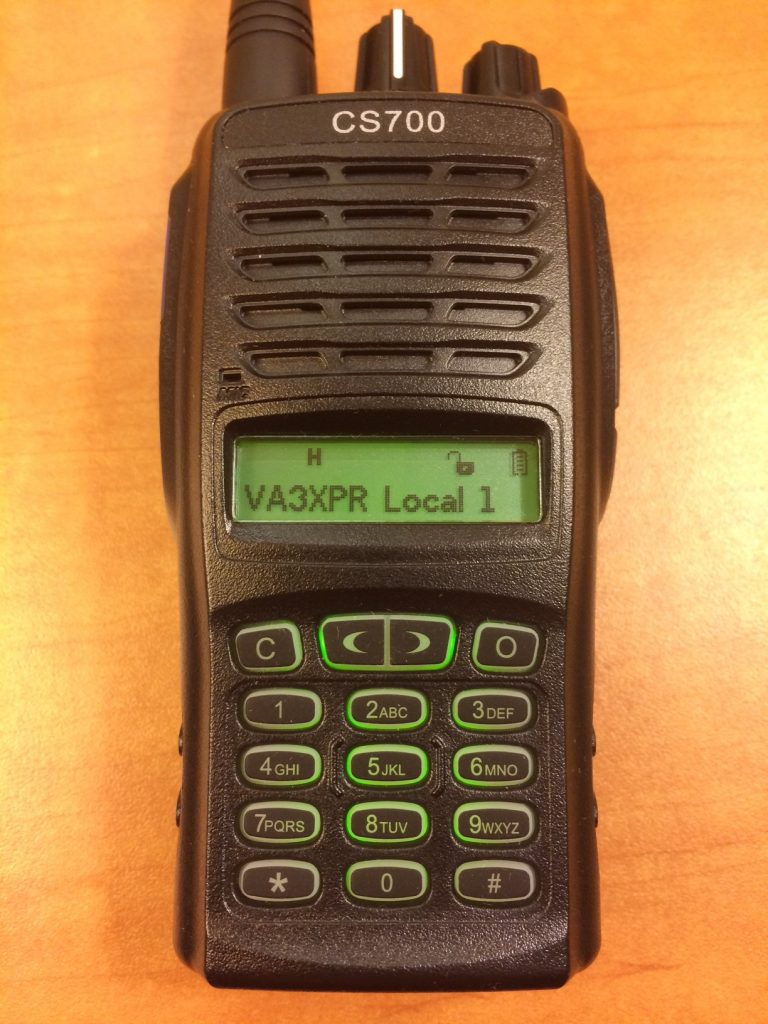 While the CS700 does not claim to meet any specific environmental operating standards, its build quality should more than suffice for typical ham radio use.

There are two knobs on the CS700 – one is the power switch/volume knob and the other is the channel selector knob. Both of these knobs are easily accessed on the top of the radio and they both provide a slight “click” as positive indication that either the radio is turned on/of or that the channel is changed. Unlike with some other DMR radios, the channel change knob does not continuously rotate and is limited to the standard 16 positions. Also, while the knobs have not been constructed using a high grip material, they can used while wearing gloves or mittens.

With regard to the buttons, the CS700 comes equipped with two programmable side buttons and one programmable top button. The function of each of these can be set in the programming software to perform the desired task. Also, the CS700 comes equipped with a 15-button keypad, which includes a 2-way navigation button to navigate the radio’s menu and settings. It should be noted that the CS700 does include the DTMF keys “A”, “B”, “C” and “D”, which are sometimes used with ham radio applications. For users who want to use this radio with DTMF applications, such IRLP in analog mode, they will be disappointed to find that the current version of firmware v1.023, does not support DTMF functionality.

The keypad buttons are constructed of high grip material, making them easy to push without having the fingers slip accidentally, plus they are backlit, which helps a great deal when using the radio at night or in dark environments.

The CS700 comes standard with a wideband UHF whip antenna. The antenna connector used with the CS700 is a standard SMA male connector, making it easy and inexpensive to connect it with an external antenna with the purchase of a SMA female adapter.

One of the best features of this radio is its audio quality, which is impressive for such a small form factor. Not only does the radio have loud, clear audio, but it also has a wide audio frequency response, providing good response to low audio frequencies. The rated speaker output from the vendor is 1,000mW, which may be overstated, since the radio volume seems to be on par with other DMR radios that have a 500mW speaker. Nonetheless, this radio will be heard in noisy environments where many typical ham radio portables will be inaudible. The fullness of the audio is one of the best features of the radio, making it a very pleasing unit to listen to.

One annoyance about the radio’s speaker audio is that it pops every time a tone is emitted, such as the Talk Permit Tone, power on tone etc. While this is not a serious flaw, it is an item that could be annoying to some users. Another item that can be a bit frustrating is that the Talk Permit Tone is sent with the transmit audio when the user keys the PTT, which should not be the case. To prevent this, the user can simply disable the Talk Permit Tone in the radio’s settings menu. While neither of these defects prevents use of the radio, they can be frustrating for the user and will hopefully be addressed in an upcoming firmware release.

With regard to microphone audio, the audio appeared to be fine, right out of the box with good reports being received from other stations during test transmissions. It should be noted that the microphone audio level appears not to be user adjustable, so if users receive complaints of hot or low audio, they will need to adjust the distance to which they are talking into the radio.

The CS700 uses a green two-line illuminated LCD display, which appears to be identical to the one used with the Motorola XPR6550, right down to the icon set used. The display accommodates contacts, talkgroups and channel information of up to 16 characters, making it quite adequate for most ham radio uses. Also, the backlight is not adjustable by the user and cannot be assigned as a programmable button in the programming software – both of which could be considered as potential radio improvements with a future firmware update.

There is a single LED indicator on the top front of the radio that is used to indicate the radio’s status as follows:

The CS700 is a dual mode UHF radio, allowing it to operate in either digital mode using DMR or in analog mode using FM. When in analog FM mode, the radio will support either 12.5 or 25 kHz channel operation. This will allow users to easily make the switch to DMR while continuing to allow them to operate using traditional 25 kHz FM.

The RF performance of the CS700 compares specification-wise pretty much on par with most other DMR radios available on the market today. The transmit power of the radio can be set to either low power (~1W) or high power (~4W), but it not adjustable in terms of the values associated with each of these settings.

It should be emphasized that while the programming software does have some defects and could be improved over time, it is overall, quite easy to use and will likely help many users new to DMR get started with much less frustration than if they were using the programming software from other DMR radio manufacturers. A big plus for this radio would be the ability to program it completely using the keypad, commonly known as Front Panel Programmable, or “FPP” for short.

To upgrade the firmware of the radio, there is a separate firmware upgrade software package, which is also available for free and downloadable from the Connect System website.

The CS700 is a great low cost option for anyone looking to get started with DMR and at $180US price point, they really cannot go wrong. While the radio still has some software defects to be worked out over time, we feel that it is well positioned to become a winner within the ham radio community.